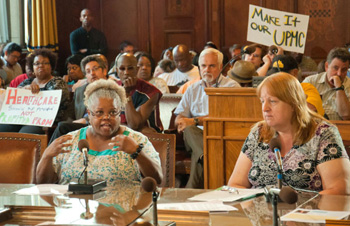 UPMC employees Teri Collins and Kathy Cabbagestalk testify at Pittsburgh City Council about UPMC’s low wages and management’s intimidation of employees trying to improve their jobs by forming a union.

Right now, big non-profit organizations can use their charitable work to shelter their for-profit ventures costing taxpayers billions of dollars in lost revenue.

UPMC, which owns the top-grossing hospital in the country, is the main beneficiary of Pittsburgh’s goodwill. Last year, UPMC Presbyterian-Shadyside brought in $10.19 Billion in revenue. Yes, that’s Billion with a capital B. 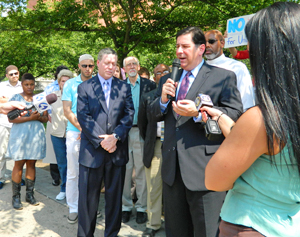 After reports of UPMC workers being intimidated by managers and high priced union avoidance consultants at UPMC, faith leaders, elected officials, and community leaders went to the annual meeting of UPMC Presbyterian-Shadyside Hospital’s board of directors to call on UPMC to respect the right of workers to form a union.

The delegation delivered a letter asking UPMC to agree to a “code of conduct” that included getting rid of management’s high-priced union busting firm from Oklahoma, an end to mandatory work time anti-union meetings, and no further worker intimidation or violations of the law.

City Councilman Bill Peduto also signed onto the letter and urged UPMC workers to keep working to form their union. “The steel mills used to be the main economic driver in our region and the wages and benefits they paid their workers helped create Pittsburgh’s middle class,” said Councilman Peduto.

“Though the mills are gone Pittsburgh has been reborn because of new industries like healthcare. We stand on the shoulders of the workers who organized in those mills so many years ago and we have to make sure that today’s workers have the same opportunity to provide for their families and participate in Pittsburgh’s growing economy.”