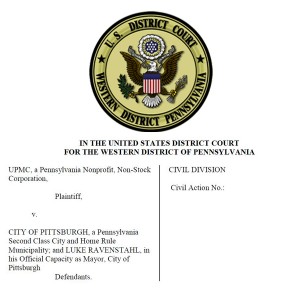 Paul Wood, UPMC’s spokesman told the Post-Gazette, “…UPMC looks forward to demonstrating in a court of law that we meet all five prongs of the HUP test and that our hospitals easily qualify for the tax-exempt status they unquestionably deserve.”

But now it seems UPMC management isn’t so confident. Perhaps they took a look at the HUP test, the standard Pennsylvania law requires charities to meet, and had second thoughts. Donating a substantial portion of its services? With only 2% of UPMC’s revenues going to charity care that might be a bit of a stretch. Operating entirely free of the private profit motive? It might be kind of hard for UPMC executives to demonstrate that claim while cashing their multi-million dollar paychecks and flying around UPMC’s global empire in private jets.

So instead of showing tax-payers That UPMC’s a charity, the healthcare giant is , suing taxpayers for an undisclosed sum of money, claiming that their civil rights have been violated.

That’s pretty rich, coming from an employer whose violation of its employees rights resulted in an historic settlement that required UPMC to stop harassing, intimidating and discriminating against workers.  Now the $10 billion dollar global health bully wants us to pay it back for the damage we’ve caused by telling the truth about UPMC’s operations.

““It is unclear to me how asking a court to make a determination whether UPMC is or is not an institution of purely public charity is a violation of its constitutional rights… The painfully obvious bottom line is that the last thing UPMC wants is judicial scrutiny of its non-charitable agenda.”

Join us in holding UPMC accountable to our city – sign onto our code of conduct and demand that UPMC start acting like a true charity – and stop acting like a big bully.

Together We Can Make It Our UPMC