The results in Pittsburgh’s Democratic primary election confirmed what we’ve been saying all along. We want elected officials who will stand up to our city’s biggest bully – UPMC.

In the mayoral race and three competitive City Council races, candidates who were vocal supporters of the City’s challenge of UPMC’s charity status and the movement to hold UPMC accountable prevailed.

In District 8, Dan Gilman was the sole candidate who voiced support for the City’s challenge to UPMC’s tax-exempt status; his opponents deemed the challenge unwise.

In Districts 4 and 6, Natalia Rudiak and Daniel Lavelle issued public statements in support of the City’s challenge and have been active in the community effort to hold UPMC accountable.

Bill Peduto, the Democratic nominee to become the next mayor, announced his support for the City’s suit against UPMC on the day it was filed. His position that UPMC needs to be accountable to patients, workers and taxpayers was a clear part of his campaign, and featured prominently in his popular “Sweeper” ad.

We know this won’t be easy. UPMC’s decision to sue taxpayers rather than have an open and honest conversation with our community about how UPMC can be part of a stronger and healthier Pittsburgh is one indication of the fight ahead.

But we also know that holding UPMC accountable is of the highest important to Pittsburgh residents and the voters who chose their representatives yesterday.

Having our next Mayor and City Councilmembers firmly on the side of patients, caregivers and taxpayers moves us one step closer to making sure UPMC does its fair share for Pittsburgh.

The countdown has begun for the primary election May 21 and the big issue on voters’ minds is holding UPMC accountable.

A poll conducted by Victoria Research for Make It Our UPMC among likely primary voters revealed that having UPMC do its fair share was the top concern among likely primary voters. Eighty-seven percent of respondents feel UPMC should pay property taxes. The poll also revealed that an overwhelming majority of people — 73 percent of those polled – think that UPMC workers would be better off with a union.

During the recent WQED mayoral candidate forum, the candidates were asked about what they would do to hold UPMC accountable.

Here are their responses:

Jack Wagner:  “If UPMC is not meeting the mandate of a nonprofit, it should be challenged.” Mr. Wagner also stated that he believes UPMC should provide all of its employees with a living wage. “There is a separation in this country between the wealthy and the poor that is unacceptable,” he said. “I am not ordering anyone to do anything [but I’m] an advocate of paying your people fairly. I’m an advocate of a living wage and I’m an advocate of increasing minimum wage.”

Bill. Peduto stated that UPMC should be held accountable to three main groups: to its patients by allowing affordable healthcare access to UPMC services no matter what insurance plan they have; to the community by paying its fair share in taxes; and to workers by allowing them to form a union so they can support their families.   “I support a living wage and I support any nonprofit that is a charity should not be stopping anyone from trying to form a union, which is the right of anyone in this country.”

Jake Wheatley said he also supports a living wage, but expressed reservations about the city’s tax challenge to UPMC’s charity status. “We would allow for the legal process to continue, but we think that’s going to be years in the making. . …We think we have some more pressing issues that we can negotiate and deal with, with UPMC and other large nonprofits, to help us as a city move forward that we shouldn’t do necessarily under the cloud of taking everyone to court.”

The strength and health of Pittsburgh’s neighborhoods depends on our largest employer, landowner and healthcare provider working with people in our city and being accountable to our needs. Let’s be sure to elect a mayor who intends to Make It Our UPMC! 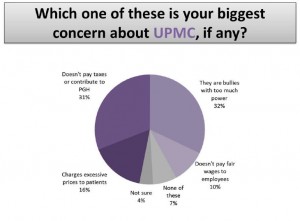 Which one of these is your biggest concern about UPMC, if any?

A new poll of likely Democratic primary voters commissioned by Make It Our UPMC reveals that concerns about the University of Pittsburgh Medical Center (UPMC) paying taxes are key issues in this year’s mayoral primary. Making UPMC pay its fair share of taxes was named as the top issue on the minds of 30% primary voters, including 33% of undecided voters. Overall, the unfavorable view of UPMC in Pittsburgh has increased sharply, from a 28% unfavorable score in October 2012 to 52% unfavorable in the most recent poll, with 32% of voters saying they have a very unfavorable view of UPMC.

“Voter discontent about UPMC’s behavior is growing rapidly,” said Donna Victoria, of Victoria Research & Consulting, a public opinion pollster. “And mayoral candidates should take notice that their position on making UPMC pay a fair share of taxes is a top – and motivating – issue for primary voters.” Voters also assert that they will base their mayoral vote on candidates’ pledging to find a way to ensure UPMC pays its fair share. Seventy-five percent of likely voters, including 64% of undecided voters, say their vote will be motivated by such a pledge.

The poll also offers new insight into what is shaping voter opinions of UPMC.  When asked about their biggest concerns with UPMC, voters responded that UPMC was a bully with too much power (32%), that UPMC doesn’t pay taxes or contribute to Pittsburgh (31%), and that UPMC charges excessive prices to patients (16%).

Seventy percent of voters say it is important that UPMC put patients ahead of profit, but 58% do not believe this is the way UPMC is conducting business.  Fifty-four percent of respondents do not think UPMC charges reasonable prices; and 50 percent do not think UPMC is a “good corporate citizen” in Pittsburgh.

“Treating employees fairly” was the second-most common answer (34%) from voters on what they feel is the most important quality for a major healthcare institution. The poll indicates that fewer than one-third of respondents think that UPMC does treat its employees fairly and 39 percent of voters do not. The poll also finds that 73 percent of respondents support the right of UPMC employees to join a union for reasons ranging from giving employees a voice on the job, better wages and general support of unions.

With so many elections right around the corner, we’re hearing a lot about policy — and even more about politics!

Undecided voters’ support for a candidate who pledges to make UPMC pay its fair share.

This spring, we learned that one smart policy also happens to be smart politics: taking a strong position on UPMC’s obligation to our community and our City’s challenge to the healthcare institution’s charity status.

And you don’t have to take my word for it.

Recently, a poll conducted for the Tribune Review shows that Pittsburgh’s challenge of UPMC’s nonprofit status has the support of an overwhelming majority of likely voters. The survey of 400 likely Democratic voters was conducted on April 1 and 2 and found that 73% of those surveyed think the challenge makes sense.

Now, a new poll shows that UPMC’s tax avoidance is the #1 issue for many primary voters, especially for those voters who are undecided.

And what should really catch candidates’ eyes is that 75% of likely primary voters, including 64% of undecideds, are willing to cast their vote based on the strength of their position in making UPMC do its fair share.

As taxpayers are being asked to do more and more, and often receiving less and less, it’s perhaps no surprise that Pittsburgh residents are looking for the city’s largest employer, landowner and healthcare provider to partner with us in making our neighborhoods healthy and strong. 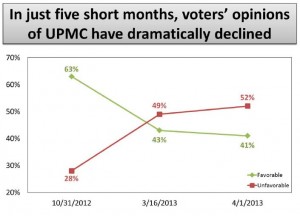 Pittsburgh is looking for more from our largest charity.  And we are concerned that UPMC seems less than interested. In just a few short months, public support for UPMC has declined rapidly, even among the majority of people in our city who directly interact with UPMC.  More than half of poll respondents now have an unfavorable view of UPMC, a 24% shift in just the past six months.

What do people really want from UPMC? Seventy percent think a great healthcare provider puts patients ahead of profit.  But nearly 60% of people think UPMC does not. Many also believe that UPMC is not charging reasonable prices and that UPMC is not a “good corporate citizen.”

What else do we know from this new poll?  Voters want UPMC to treat employees fairly. Fully 73% of respondents think UPMC employees would be better off with a union, and over 50% believe this strongly.

The public has spoken, and UPMC should take time to listen.  Pittsburgh wants UPMC to be a better employer and a better neighbor.

Pittsburgh wants those elected this May to make this a priority.

Michael Lamb
Michael Lamb was elected Controller of the City of Pittsburgh in November of 2007. As Controller, Michael Lamb has put a focus on making Pittsburgh government more transparent.  In addition to being City Controller, Lamb serves on the boards of the Kane Foundation, the Catholic Youth Association, the Downtown Pittsburgh YMCA and the 3 Rivers Wet Weather Demonstration Project. He is a member of the Mount Washington – Duquesne Heights Community Development Corporation, and sits on the Board of Fellows of the University of Pittsburgh’s Institute of Politics.  Lamb was also the founding co-chair of A Plus Schools, the community alliance for Pittsburgh Public education. 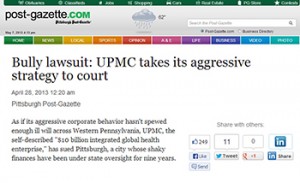 An editorial published in the Post-Gazette called out UPMC for what it really is, a bully. The Post-Gazette hit the nail on the head with its editorial, calling out UPMC for suing the city, while claiming it is a purely public charity. It also noted that the $10 billion dollar hospital systems corporate goal of creating a local monopoly on health care is just one more reason why UPMC is not acting like a purely public charity:

“Many people praise their UPMC doctors and thank their UPMC nurses, but UPMC’s corporate strategy to reject Highmark insurance customers after 2014 and drive out the West Penn Allegheny Health System — the thin line of defense against a UPMC monopoly — is uncharitable behavior to the max.”

UPMC seems to be afraid of the HUP test – going to great lengths to keep from paying their fair share. Suing the taxpayers of Pittsburgh is just one more example that UPMC is not a charity. 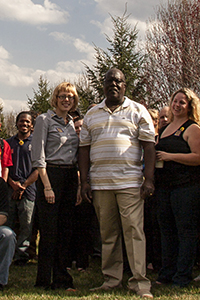 Councilwoman Natalia Rudiak is a leader who will make sure UPMC acts like a real charity.

On Saturday May 4th, dozens of volunteers from Make It Our UPMC  went door-to-door in South Pittsburgh to help re-elect City Councilwoman Natalia Rudiak. Councilwoman Rudiak was one of the first elected leaders to use her office to help hold UPMC accountable. Last June, she held an important post-agenda hearing to allow experts, city officials and others to raise questions and share facts about UPMC’s behavior. She took the lead in a City Council proclamation supporting UPMC workers Frank Lavelle and Ron Oakes, who were fired by UPMC and brought back to work when UPMC chose to settle labor charges rather than face a lengthy trial. Natalia also helped lead a delegation of community  and elected leaders who visited UPMC demanding that the health giant stop mistreating employees and violating their rights.

Natalia understands that UPMC needs to be a partner in fostering a strong and healthy Pittsburgh. This means treating patients regardless of what insurance card they carry, creating middle class jobs –not spending healthcare dollars on anti-union campaigns, and paying its fair share to help fund essential services like public transit.

Councilwoman Natalia Rudiak is a leader who will make sure UPMC acts like a real charity.

Together we can Make It Our UPMC!