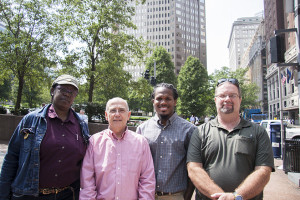 On August 22nd Pittsburgh UNITED joined by UPMC workers, elected officials, and faith and labor leaders held a press conference  to talk about the most pressing issue facing our community today: income inequality.

Income inequality in the city is as high as it’s been since the Depression, and our middle class is shrinking rather than growing. And while unemployment rates are better than average, a problem facing too many Pittsburgh workers is low and stagnant wages.

One thing that stands at the center of this issue is our city’s largest employer: UPMC.

UPMC employs over 55,000 people. Most are in the region. Thousands work full time without the ability to earn enough to sustain their families or significantly improve their economic standing.

Pittsburgh UNITED released a report that goes into detail on just how big of a problem UPMC’s poverty wages are for our city. 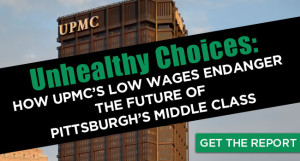 The good news: UPMC has the power to lift thousands of families out of poverty and fuel Pittsburgh’s middle class.

The bad news: UPMC is continuing its bully behavior by spending its money on multi-million dollar anti-union campaigns, working alongside well-funded anti-worker organizations and engaging other tactics aimed at preventing its from coming together to make improvements for themselves and our community.

The report shows us that we–as a community–must demand more from UPMC. On September 7th, Join us in calling on UPMC to:

The steps are small, and the impact would be great. The strength of our city depends on UPMC playing a stronger role in improving our economy.

Join us on September 7th, and Stand Up to UPMC.