“That kind of income inequality is intolerable,” he added.

Democratic candidates for governor unite against Corbett, UPMC in debate 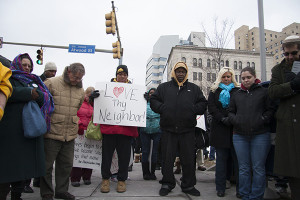 On MLK Day UPMC workers, faith leaders, and community members gathered to honor Dr. King’s legacy of fighting for worker justice by calling on UPMC to pay all its workers a living wage.

Members of the Pennsylvania Interfaith Impact Network (PIIN) kicked off their campaign for economic justice with a prayer vigil outside of UPMC Presbyterian in Oakland. Nearly 100 from Pittsburgh’s low income communities ignored the bitter cold to join ministers and other people of faith as they launched PIIN’s “Love Thy Neighbor” campaign and call on the global healthcare giant to end to its anti-worker campaign and to pay all of its employees a real living wage.

With income inequality at an all-time high, we need UPMC, our city’s dominant economic actor, to do more to lift up people in poverty. Marcus Ptomey is a Unit Tech at UPMC Presby, who, like many UPMC workers, has to work more than full time every week just to get by. “There is something wrong with the picture when we work long hard hours but barely make ends meet,” said Marcus. “We take pride in being there for our community in great times of need, yet many of us must rely on the generosity of strangers to put food on our tables.”

Mobilizing people of faith to stand up against economic injustice, clergy from PIIN called on UPMC to end its anti-worker campaign and help life thousands of Pittsburgh residents out of poverty. “The faith community, through the Love thy Neighbor campaign, recognizes the moral imperative to act and call on UPMC, the largest employer in this region, to do the right thing and lift families through family sustaining wages,” said Rev. John Welch, a minister whose involvement with UPMC workers goes back more than a year, when he accompanied employees and elected leaders to the Presbyterian Hospital Board meeting, to ask Board members to put an end to UPMC’s vicious and expensive anti-union campaign.

Experts calculate that UPMC’s wages leave thousands of service workers — UPMC’s largest group of employees — living with less than Pittsburgh’s “no-frills” budget requires. They rely on food banks to put food on their tables and federal housing assistance to keep roofs over their heads. Despite being a charitable hospitals system, UPMC employs the third largest number of full time workers in our state who rely on Medicaid for health insurance, after Walmart and McDonald’s.

Marcus Ptomey captured the resolve and hope of workers and and people of faith in our city: “Together, with the strength of God and each other, we can win this fight with UPMC. As we learned from David, the little guy with principles, a brave heart, and strong faith can stand up to giants and win.”

Together, we can Make It Our UPMC. 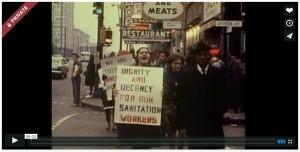 Our great friends at California Newsreel want us to have this knowledge and inspiration, so they’re giving UPMC workers and Make It Our UPMC supporters special access to view it free of charge.

UPMC workers are starting the year by reflecting on Martin Luther King Jr. s work to end poverty and win dignity for every person. On Monday, Martin Luther King Jr. Day, UPMC workers will join Pittsburgh Interfaith Impact Network (PIIN) and community members for a prayer vigil to reflect on Dr. King’s fight for worker justice and to unite around the need for UPMC to pay its workers a living wage.

Join us as we help PIIN kick off its “Love Thy Neighbor” campaign.

Love Thy Neighbor as a:

Worker with a living wage

family that can put food on the table

Corporation that treats ALL of its employees fairly

Working class that has the opportunity to succeed

Also, UPMC workers will be watching At the River I Stand, a documentary about the 1968 sanitation workers strike that brought Martin Luther King Jr. to Memphis. Our friends at California Newsreel want us to have this knowledge and inspiration, so they’re giving UPMC workers and Make It Our UPMC supporters special access to view it free of charge.

Click Here To Watch: http://vimeo.com/californianewsreel/atris. Passcode is LOVETHYNEIGHBOR (all caps). Access if free of charge through Monday.

Together we can Make It Our UPMC! 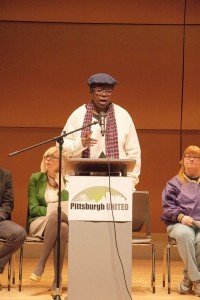 Christoria Hughes, who prepares food at UPMC Presby, has trouble supporting her family on UPMC’s wages.

In a standing room only crowd, member organizations of Pittsburgh United welcomed new Mayor Bill Peduto and a new day for our city, where grassroots and elected leaders alike are united to create and sustain good jobs, a clean environment, and fairness for all. At the top of the list for many speakers: the rights of workers at UPMC.

According to Barney Oursler, Pittsburgh United’s Executive Director, “The fight to organize at UPMC will be the one to determine if we rebuild the middle class in Pittsburgh.”  Sam Williamson, Western PA Area Leader for SEIU32BJ, agreed, and stressed the role of workers’ organization in making good jobs a reality: “Without the right to form a union at UPMC, we will not be able to turn poverty jobs into good family sustaining jobs.”

Christoria Hughes, who prepares food at UPMC Presby, has trouble supporting her family on UPMC’s wages. “Pittsburgh is supposed to be one of the most liveable cities in the country. A place where if you work hard, you can get ahead. Where you can have a job that will allow you to support your family,” she said. “But for many of us who work for Pittsburgh’s largest employer, no matter how hard we work, or how much overtime we put in, we just can’t keep up.”

“I try to work as much over time as possible,” she went on to say. “Many of my coworkers work close to 70 hours a week but still rely on federal housing assistance just to keep a roof over their heads. “

In addition to electing a new mayor, the people of Pittsburgh elected a progressive City Council and are thrilled by the re-election of Councilwoman Natalia Rudiak, who gave voice to what many were thinking: “Pittsburgh should be known not only as the city that created the middle class but also the city that saved it.”

It’s time to Make It Our UPMC