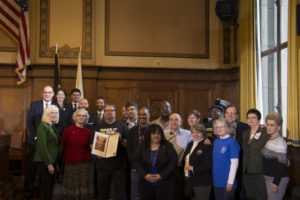 A year ago, I stood with my coworkers and hundreds of our supporters from all across the city to demand better of UPMC. We were so proud of Pittsburgh’s determination to raise our voices about a charity that doesn’t really act like one. And we’re so encouraged to see that now, a year later, we’ve been joined by adjuncts, casino workers, Wal-Mart workers, fast food workers – all of whom are saying it’s time to address income inequality in our city. It’s time for workers to have a voice, a union and $15.
Yesterday morning, the Pittsburgh City Council unanimously passed a resolution affirming its commitment to stand with me and my coworkers in our fight to win $15 and the right to form a union without fear of retaliation.

City Council Member Natalia Rudiak said: ”One year ago, employees, taxpayers and patients stood side by side to demand ethical, fair, and just behavior from UPMC. But our region’s largest employer continues to act above the law. Today, city leaders are putting the non-profit on notice. Over the past year our commitment has grown stronger and stronger, and we are committed to standing with UPMC workers in the fight for $15, a union and a more equal future for all workers.”
Despite the unity of workers across our city, UPMC continues to hold Pittsburgh back. Just this November, the federal labor board ruled that UPMC continues to engage in “widespread and egregious misconduct”. Right now, there’s an OSHA investigation underway concerning a cleaning product that makes workers very sick, though, as one manager put it, it’s easier on the furniture. And UPMC’s official position on jobs at the largest employer is that family-supporting jobs are a good idea, but that’s not realistic.
We work for our region’s largest employer – one with $4 billion in reserves – and want to better ourselves and our families. Pittsburgh believes that if our largest employer isn’t setting a good example, they’re setting a bad one, and that will affect all of us in the city.
Join UPMC workers and the City Council by signing onto the resolution and tell UPMC Pittsburghers need $15 and a union. Click here to sign
Together we can make it our UPMC.
Veronica Shields
Pharmacy Tech – UPMC Mercy