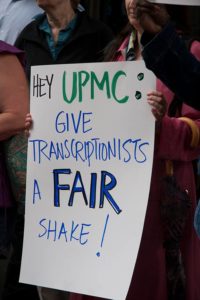 We’re so grateful for the support of people in Pittsburgh who reached out to help us and we’re proud to be part of the big movement to make UPMC act like a real charity.

We stood up to UPMC and we won.
I’d like to share some good news about the medical transcriptionists UPMC abruptly laid off last year. I’m one of them.
The state Unemployment Compensation Board of Review found that a group of us who filed for unemployment are in fact eligible.
As you may remember, last year UPMC outsourced our good transcriptionist jobs to a private contractor, Nuance Communications, which pays poverty-rate wages- just pennies per line – even though we were working for the same hospitals and doctors and doing the same skilled work!
I went from making $17.81 an hour to minimum wage. Our new pay was so low, many of us had to sell our belongings and move in with relatives to keep our families off the streets. I had to dip into retirement savings to pay the bills.
UPMC wanted to be sure that we would take this massive pay cut but not lose our experience and skill. So when they laid us off, they told us we wouldn’t be eligible for unemployment benefits. No income while we tried to regroup and find jobs to support our families. No choice but to do the same work for half the pay.
But we fought back.
After months of hearings and hassles, the Unemployment Compensation Board of Review recently sided with us and said we have every right to these benefits. That means thousands of dollars for people who UPMC said it owed nothing.
We’re so grateful for the support of people in Pittsburgh who reached out to help us and we’re proud to be part of the big movement to make UPMC act like a real charity.
Together, we can Make It Our UPMC.
Gina Frederick