The truth is our effort to improve jobs at UPMC isn’t just about UPMC. For me, it’s about putting my grandchildren to sleep at night and knowing I am doing everything I can for them to wake up in a better Pittsburgh.

Last year on Labor Day, thousands of union members from across our city joined my coworkers and me to let UPMC know that labor supports us as we form our union.
I was honored to know that the Teamsters, Steelworkers, teachers and all our union brothers and sisters have our backs in our movement to make sure the new economy works for everyone.
We’re making progress in this David and Goliath fight that many thought was impossible: a year ago, after we started talking about the problems we face on the job, UPMC increased wages by $1.
Other service workers in Pittsburgh tell me our work to improve jobs at the region’s largest employer has encouraged and inspired them to fight for good jobs. The truth is our effort to improve jobs at UPMC isn’t just about UPMC. For me, it’s about putting my grandchildren to sleep at night and knowing I am doing everything I can for them to wake up in a better Pittsburgh. It’s about setting a new standard for jobs in this city so my neighbor who is a fast food worker can afford to give his kids a hot meal.
This Labor Day, casino workers, fast food workers, adjunct instructors, security officers and other service workers from all over Pittsburgh will march with us as we tell our employers: Pittsburgh Workers are Rising.
Our calls for good jobs with a union got the attention of gubernatorial candidate Tom Wolf who will join us at the parade to hear how about our movement for change in Pittsburgh.
Will you join all of us Labor Day and stand up for good jobs with a union?
March with the workers who are fighting to Make It Our UPMC:
Consol Center Center Ave – E. Parking Lot
10:00 AM
Coffee & Donuts Provided
Join us for a Labor Day reception with special guest Tom Wolf:
US Steel Workers Building
60 Boulevard of the Allies
12:45 PM
Refreshments Provided
Together we can raise up Pittsburgh.
Teri Collins
Unit Secretary, UPMC Montefiore

On Jan. 1, UPMC will achieve its long-sought divorce from Highmark. The separation will undoubtedly disrupt care, add untold stress and potentially harm thousands. UPMC, in refusing even to negotiate a renewed contract, has plainly driven the breakup.
UPMC’s costly divorce from Highmark – Pittsburgh Post Gazette

Gubernatorial candidate Tom Wolf met with workers who are fighting to rebuild the middle class.

Across our city, tens of thousands of workers are standing up for good jobs and a union.  In our hospitals, casinos, fast food joints, and universities, from health aids to adjuncts to security workers to janitors, we know that the only path to real prosperity in the “eds and meds” economy is with a voice on the job.
What better way to meet one another and celebrate our determination than a good old-fashioned cook out?  Our union movement is bringing us together as one family, building a brighter future for ourselves and our kids.
Guess who joined us? Gubernatorial candidate Tom Wolf! He wanted to meet workers who are organizing and let us know that he’s down with our fight to rebuild the middle class. Here’s what he had to say:

“Your fight for your union is about fairness. And it is unfair that many of you can’t even afford to receive the same care you give every day. Cutting people off from the middle class only does one thing – it cuts off our economic vitality. We need good family sustaining jobs if we want a fresh start in Pennsylvania.”

Fairness. Strong working families. And top notch care. For me, that’s what a health care union is all about. As a medical assistant at Children’s Hospital, I love helping kids feel at ease at a time of stress and worry. As a mom, I’m also all about making a good life for my son. 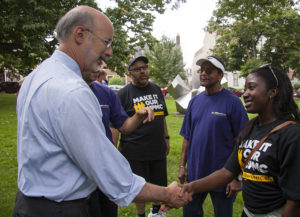 We’re calling for a family sustaining wage and a union at UPMC because that’s fair. It’s how we build strong families, And it’s how front line caregivers like me help ensure that our hospitals put patients over profits. That’s the formula for making sure that this new economy builds healthy communities.
I’m excited to be part of Pittsburgh’s rising workers. And proud to be supporting Tom Wolf for Governor.
Together, we can make it our UPMC.
Latasha Tabb
Medical Assistant – UPMC Children’s Hospital