UPMC hospital workers just won a huge victory for the city of Pittsburgh – the largest wage raise from a private employer in the country. UPMC executives said it wasn’t possible, but we proved that by standing together we can win real changes for our families.
Are we stopping now? Heck, no! $15 is a great start for the workers who keep our city healthy. But for our city to be as strong as we know it can be, we need a real voice on the job, affordable access to care for every patient, and for UPMC – our largest employer, landowner and charity – to respect Pittsburgh residents. We need union rights.
Even after being cited for widespread and egregious violations of federal labor law by an administrative law judge, UPMC continues to violate our right to form a union without fear of retaliation, intimidation and harassment. That’s not progress for the city we love.
Pittsburgh needs affordable access to care for every patient.
Pittsburgh needs an end to the unlawful anti-union campaigns.
Pittsburgh needs the respect we deserve.
By standing together, workers have won a huge victory for working people. To keep winning for our families, we need union rights.
Stand with us on April 14th for our care, our families and our city. 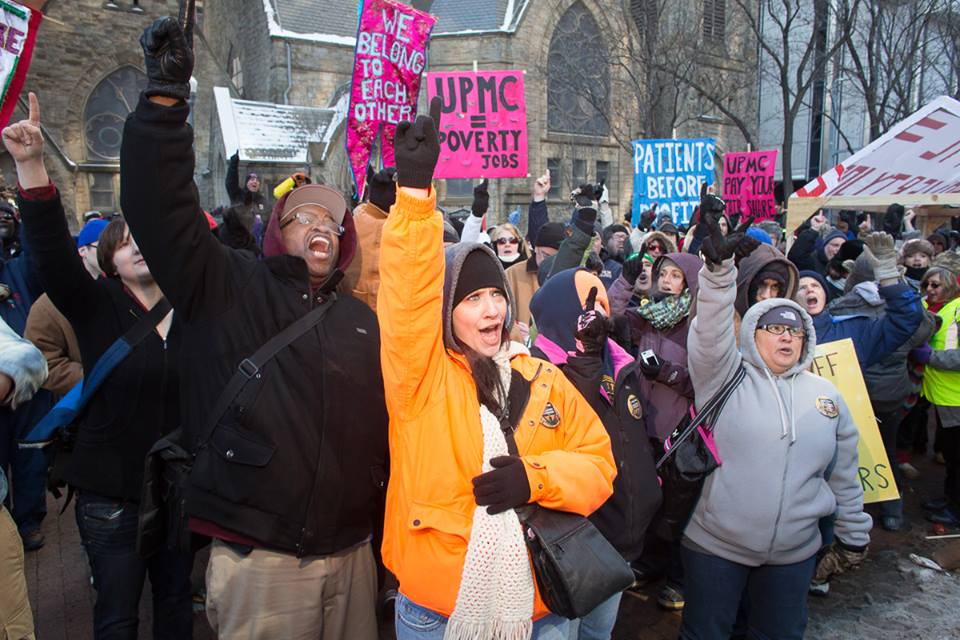 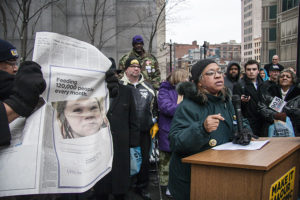 “UPMC executives said they would never pay workers $15 an hour, but hospital workers came together to stand up for our rights and for better pay, and we won the raises our families and communities need and deserve,” said Leslie Poston who works at UPMC Presbyterian and is paid $13/hour. “Our union has lifted up worker voices, built support throughout the community and together, we have made UPMC change. We will continue standing together until UPMC ends its anti-union campaign, provides affordable access to care to all patients and treats all Pittsburgh residents with the respect we deserve.”
We can arrange interviews with Leslie and other UPMC hospital workers to discuss the announcement.
Background:
When hospital workers stood together, they win for Pittsburgh. Through their efforts, Pittsburgh City Council launched an investigation into UPMC’s wages, which found UPMC is the “low wage maker” not just for Pittsburgh but for the entire region. Hundreds of Washington Hospital workers just won a pathway to $15/hr and 1,200 hospital workers at Allegheny General Hospital have come together in their new union to ensure quality care for every patient and make sure every job can support a family.
While UPMC stockpiles its $4 billion reserves and pays 31 executives more than $1 million each, workers have to choose between groceries and healthcare bills and others are bullied for trying to have a real conversation about better jobs and better healthcare. Just two years ago, UPMC Senior Vice President Greg Peaslee told the New York Times that $15/hour is “a great notion, but it’s not realistic.”
Instead of working with hospital workers who want quality care and strong communities, UPMC illegally fires and intimidates frontline workers who are trying to form their union. The federal government has issued a series of complaints against UPMC alleging over 100 violations of workers’ rights. A federal judge ruled that UPMC has engaged in systemic and egregious violations and ordered them to reinstate illegally fired workers. UPMC has yet to remedy many of these violations.
After hospital workers took their agenda for change to city leaders, Pittsburgh City Council launched a Wage Review Committee to investigate the impact of UPMC’s wages on our city, and City Council Member Rev. Burgess called UPMC wages a “national disgrace.”