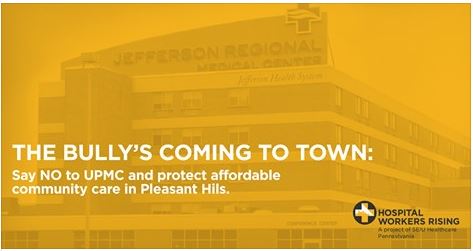 UPDATE: UPMC has delayed the hearing. We’ll update here when it’s rescheduled.  Click here to contact us and stay connected on this important issue facing our community.
For years, UPMC has tried to bully its way to a monopoly on care. Now, the healthcare giant is trying to muscle into Pleasant Hills. UPMC wants to build a new 300,000-square-foot hospital off of Route 51, less than a mile from Jefferson Hospital. But this isn’t about community well-being or patient care — it’s about greed. As the Post-Gazette reported, Pleasant Hills residents are fighting this development because we know that a new UPMC hospital is bad for community health care and bad for our neighborhood.
Here’s the good news: UPMC has to get zoning approval for this massive development project. At the first zoning board meeting, more than 150 people showed up, the majority speaking out against UPMC’s proposal. There were so many people that the board had to reschedule the meeting for a bigger venue.
Please join us to protect our community hospital and say NO to UPMC.
UPMC has delayed the hearing. We’ll update here when it’s rescheduled.
Where: Pleasant Hills Zoning Board meeting, large group instruction room, Pleasant Hills Middle School

The hearing had been scheduled for Tuesday, but now could be delayed 60 days. UPMC wants to build a 300,000-square-foot hospital on an 80-acre tract off Route 51, but the borough’s land use ordinance does not include a provision for a hospital. Such zoning omissions rarely have withstood legal challenge.