UPMC is a $10 billion global health enterprise* that made almost a billion in profits over the past two years. It’s our largest employer, our largest landowner, our largest healthcare provider, and it claims to be our largest charitable institution.
* http://www.upmc.com/about/facts/pages/default.aspx 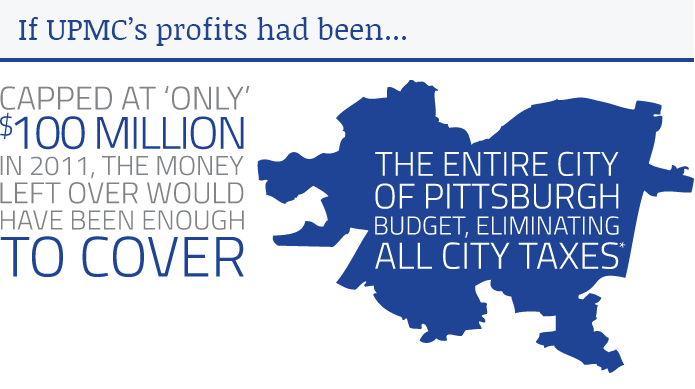 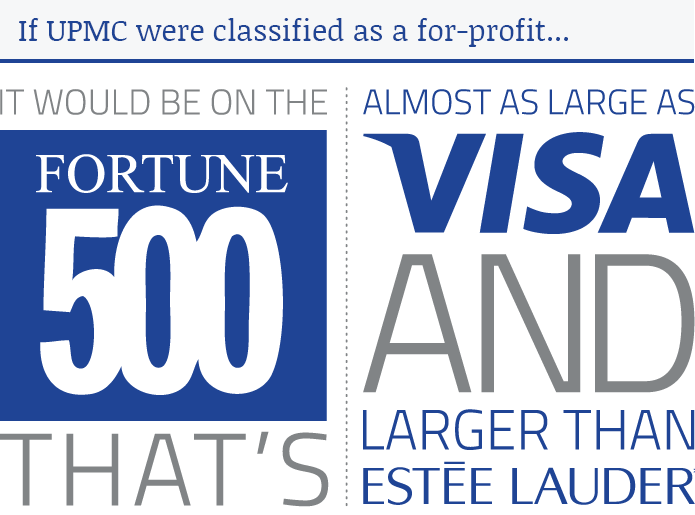 number 266 if it were a publicly-traded for-profit company.

billion in ‘board-designated, restricted, trusteed and other

investments’ and another $379.9 million in ‘beneficial interests in

foundations’ for a total of over $4.3 billion.

The Pennsylvania Supreme Court has defined a clear set of rules to ensure that organizations treated as charities behave as charities; UPMC simply isn’t following them. While UPMC has grown from a single local hospital to a $10 billion global health enterprise, its charitable status has gone unchecked. It’s time to hold UPMC accountable to taxpayers, employees, healthcare consumers, and everyone in our community.

To many of us in the community, UPMC seems to behave much more like a for-profit corporation than a charity: Even by UPMC’s ownquestionable standards of what counts as “charity care,” UPMC provides less than 2% of its patient revenue in charity care.*

UPMC seems to select locations for building new facilities based less on community need than on where competitors can be driven out of the market. It has closed facilities in neighborhoods most needing free care, while building in affluent communities that already have hospitals. CEO Jeffrey Romoff’s compensation exceeds that of many for-profit CEOs – and surpasses by millions the heads of other elite healthcare organizations like Cleveland Clinic, Mayo Clinic and Johns Hopkins.**

* See audited financial statements, op. cit. Note 3 to the financial statement (p. 10) shows that UPMC provided $96.2 million in charity care, valued at cost. According to the statement of operations (p. 3), UPMC had $5.26 billion in net patient revenue, after accounting for bad debts. This works out to 1.83% of patient revenue spent on charity care. If wewere to take into account UPMC’s insurance and other revenue, the percentage would be even lower.
** Jeffrey Romoff’s pay is from IRS Form 990 for UPMC Group, fiscal year ended June 30, 2012,

p. 312. Pay in comparable years for the CEOs of Cleveland Clinic, Partners, Mayo, and Johns Hopkins, respectively, can be found on their