Demonstrators are arrested along Grant Street during a protest against UPMC, calling for good jobs with a union for all service workers, Downtown on Wednesday, July 30, 2014. The protestors began with a rally in Mellon Square Park then marched to UPMC’s headquarters where around 30 demonstrators were arrested by police.

Hundreds of UPMC workers, janitors, faith leaders, union members, community groups and other Pittsburghers marched to UPMC’s headquarters to demand more. At least 30 people were arrested during the rally.

Wednesday afternoon’s protest snarled rush-hour traffic in Downtown and involved a police-escorted march from the newly re-opened Mellon Square Park, along Sixth Avenue and ended in front of UPMC headquarters on Grant Street.

Earlier this morning workers, community members, and faith leaders gathered at UPMC Shadyside while trying to talk to UPMC management about the firings of union janitors for supporting me and my co-workers forming our union.
Instead of meeting with them, UPMC security called the police, and 6 people were arrested while calling on UPMC to stop retaliating against workers who have stood with us.
Now more than ever we need to tell UPMC to stop holding us back. The new eds and meds economy can provide a path into the middle class for thousands of workers in Pittsburgh – but that won’t happen unless working people can make our priorities part of decision-making. We need our largest employer, landowner and charity to respect our right to a voice on the job,

Our friend Reverend John Welch from the Pennsylvania Interfaith Impact Network put it this way:

“Good jobs with worker protections, access to affordable healthcare and paying a fair share are not gifts to Pittsburgh.  They are what Pittsburghers expect from our city’s largest employer, healthcare provider and landowner. With sufficient money to pay millions to executives, to buy corporate jets and to set aside in profits, UPMC can and must do more to strengthen our families and our city and lead the way for others to do the same.”

This afternoon we will be taking our call directly to UPMC. Can you join my co-workers and me to demand that UPMC stop holding us back?
WHAT: Good Jobs With A Union at UPMC!
WHEN: Wednesday, July 30, 4:30 pm
WHERE: Mellon Square Park – 6th Ave and William Penn Place
You can RSVP on Facebook Here: https://www.facebook.com/events/662562463826461/
Together we can make it OUR UPMC.
Christoria Hughes
Dietary, UPMC Presbyterian Hospital

My name is Al Turner, and I am fighting for $15 and a union at UPMC.

My name is Al Turner. I drove a shuttle bus at UPMC for two and a half years, making sure that everyone in the hospital got to work safely and on time. I loved my job, but UPMC fired me for coming together with my coworkers to form a union so we could improve jobs in our city.
I’ve lived in Pittsburgh my whole life, and over the past decade I’ve seen a lot of changes.  A lot of them are good. But our new eds and meds economy hasn’t created the good jobs that working people need to support their families.
That’s why I started fighting for $15 an hour and a union at UPMC.
I thought a job at UPMC would mean more opportunity. So when I had the chance to go to work there, I jumped at it.
But you know what? The idea that all the jobs at UPMC are good jobs is just a myth.
While UPMC brought in $1.3 billion in profits in the last three years, it pays thousands of its service workers—the biggest group in its hospitals—8% to 30% below what it takes to live in Pittsburgh.
UPMC should be using its enormous power and wealth to lift everyone out of poverty. But instead of working with us to create good jobs, UPMC works against us. They fired me because I came together with my co-workers to make improvements for our city. And recently UPMC even took away good union jobs from a group of janitors who clean its Shadyside office complex. They are losing their jobs because they stood with my coworkers and me.
It’s time for UPMC to work with us to rebuild Pittsburgh’s middle class. Can you join my co-workers and me on July 30th to stand up for good jobs with a union at UPMC?
What: Good Jobs with A Union at UPMC
When: Wednesday, July 30th at 4:30 PM
Where: Mellon Square Park – 6th Ave and William Penn Place – Downtown Pittsburgh
RSVP On Facebook Here
Together we can make it Our UPMC 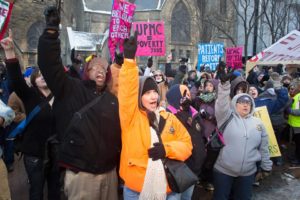 Strong and healthy communities begin with good jobs and a union so that workers can support their families and join the middle class.
WHAT: Good Jobs and a Union at UPMC!
WHEN: Wednesday, July 30, 4:30 pm
WHERE: Mellon Square, Downtown
With 62,000 employees, $1.3 billion in profits in the last three years, $4 billion in reserves, and 31 top executives who together take home $54.5 million annually, UPMC should be working with us to make eds-and-meds jobs into good jobs.
Instead, UPMC is standing in the way of thousands of workers who are building their union as a path out of poverty. UPMC recently took away good union jobs from a group of hard-working janitors who clean its Shadyside office complex. These janitors are losing their jobs because they stood with UPMC’s hospital workers organizing to improve their lives. UPMC’s service workers, the biggest group in its hospitals, are paid between 8% and 30% below what it takes to live in Pittsburgh.
Across our country, workers are rising up for a fair shake in the new economy. That means wages that support our families and a voice on the job.It’s time for UPMC to stop holding Pittsburgh back. It’s time for good jobs and a union at UPMC.
RSVP On Facebook – Click Here
Download a Flyer – Click Here

On Wednesday, Common Pleas Court Judge R. Stanton Wettick Jr. threw out the City of Pittsburgh lawsuit that had sought to impose the payroll tax on the $10 billion enterprise. But it’s way too early for UPMC to be popping the bubbly.

Allegheny County Common Pleas Judge R. Stanton Wettick’s ruling is very clear that this has nothing to do with UPMC’s charity status, and our community feels strongly that based on the organization’s actions, the health care giant is not a charity.