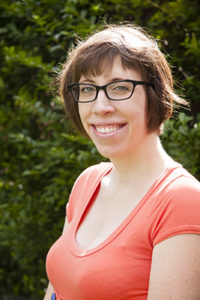 Casey Swartz, Highmark subscriber cut off from her UPMC doctors during follow up care for thyroid cancer.

In 2009, my midwife found a cancerous nodule on my thyroid. In the years that followed, my UPMC endocrinologist carefully managed my follow-up and saw me through intensive treatment during my first pregnancy. Then out of the blue, last October, my endocrinologist told me I’d have to find a new doctor. His office no longer accepted my Highmark insurance.
People in Pittsburgh are rightfully outraged by UPMC’s decision to deny hundreds of thousands of people in-network access to our doctors and hospitals. We are demanding that something be done. Right now Governor Tom Corbett and Attorney General Kathleen Kane are meeting with UPMC and Highmark to decide the future for thousands of patients like me. But Governor Corbett has already announced that a new contract between my doctor and my insurer is “off the table.” He just  wants folks like me to have “clarity” about how we’ll be hurt. He calls this putting patients first!
This is unacceptable for me, my family and for every patient in our region.
There is only ONE plan that puts patients first. Affordable in-network access to all area hospitals for every resident, regardless the color of our insurance card. Our tax-dollars, charitable donations, and healthcare dollars helped build UPMC – and we should have access to it.
Can you join me on Wednesday, July 25th at 11:30 am as we march from Governor Corbett’s office to AG Kathleen Kane’s? We are going to demand that patients really come first in any agreement between UPMC and Highmark.
Join Us:
Wednesday, June 25th – 11:30 AM
Governor Corbett’s Office
Piatt Place, 301 5th Ave
Pittsburgh, PA 15222
Let’s remind our elected leaders what their job is: to protect patients and our charitable assets, not bargain over the effects of an outrageous and unjust plan. It’s time to put patients before profits and patients before politics.
Together we can make it OUR UPMC
Casey Swartz
Patient