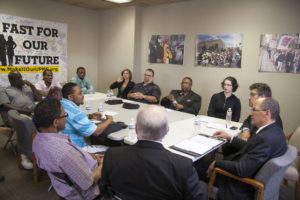 US Labor Secretary Tom Perez listened to workers’ stories in their struggle for fair wages and better working conditions that will strengthen Pittsburgh’s middle class and bring thousands out of poverty.

Today, U.S. Labor Secretary Tom Perez met with UPMC workers. Secretary Perez listened to workers’ stories in their struggle for fair wages and better working conditions that will strengthen Pittsburgh’s middle class and bring thousands out of poverty.
As Veronica Shields, who works as a pharmacy technician at UPMC Mercy Hospital, shared with Secretary Perez, “I have always wanted to be part of making people well. As a pharmacy tech, I make sure that patients get the medicine they need to heal. I love my job and I am proud of the work that I do. UPMC workers aren’t looking to be millionaires, but we believe we deserve enough to get by. But that is not what we get at UPMC. Right now, we worry about paying every bill and stay up at night thinking about what would happen if our car broke down. Many of my coworkers couldn’t handle a financial emergency like that.”
Veronica is not alone. Latasha Tabb, who works at UPMC Children’s Hospital, has said, “My husband and I have a young son and I feel like I’m fighting for his future. We need UPMC to do better so my child can have a chance at a good middle class life. Many of my coworkers struggle with making ends meet, and are working two jobs, or picking up as much overtime as they can, and still have to use food banks just to feed their families. It isn’t right that someone working full time hours at UPMC is living in poverty. UPMC has the ability to ensure that we can support our families, but instead it has chosen to hold our entire community back by paying poverty wages.”
Recently we have seen businesses and policymakers – from Seattle to Washington, DC – recognize what Pittsburgh knows: when workers are paid a living wage, the economy grows. Here in Pittsburgh, our largest employer has the opportunity to be a national leader in ending income inequality. By paying all of its workers a minimum of $15 an hour, UPMC could help lift thousands of workers out of poverty, provide millions in new tax dollars for Pittsburgh public schools, and drive up to $53.4 million in new economic activity in our region.
Reverend Rodney Lyde of Baptist Temple Church, who joined the meeting today, said, “It is time for UPMC to start living up to its responsibilities as Pittsburgh’s largest employer and tax exempt charity by using its power and wealth to help re-build struggling neighborhoods and lift workers into the middle class with good jobs for a strong and healthy Pittsburgh.”